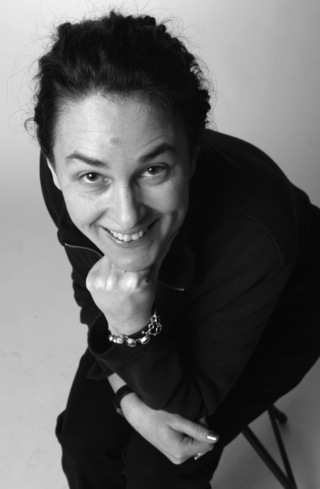 When I was a kid, I suffered from math nightmares. I turned my insomnia into my first published article: "What to do when you’re in bed, can’t get to sleep and you don’t have any flashlight batteries. My suggestions? Do gymnastics if you have a large bed, apply pimple cream, or mess up your room.

I was 11 years old. The article was published in a collection called Another Wordsandwich (Books By Kids). I remember the glee when my author’s copy landed through the mail slot onto our hallway floor. Books By Kids morphed into Annick Press in Toronto, Canada. When I wrote and illustrated my first book, The Hug, I knocked on Annick’s door. (I have re-imagined the story as a board book for 2010.)

My mother worked as a teacher and going to the library was as necessary for us as going to the grocery store. I think libraries should be open 24 hours a day! I used to pretend to be Harriet The Spy. Harriet was the central character in a book called Harriet the Spy by Louise Fitzhugh. I remember hiding behind my parents’ stereo in the living room, crouching behind the couch, conducting surveillance. I had a secret notebook I kept in a pocket where I would record observations.

When I was in Grade 4, I was certain teachers were from another planet. I was convinced they were aliens. And so as a spy I used to write a list of items that belonged to my teacher, Mrs. Dodd, because I was trying to figure out just what kind of alien she might be. The case turned puzzling when I realized she had ordinary things humans had, such as "blue nylons," "a ball of macramé string" and a "frying pan." When it was Hallowe’en, I dressed up as a clown and knocked on her door with my best friend in the quest to gather more intelligence. "Potted plants, umbrellas, husband" got added to the list. The case remained forever unresolved after Mrs. Dodd moved from Hamilton, Ontario to Melbourne, Australia.

Because I was curious, I became a journalist. I felt embarrassed there was so much I did not know. Being a journalist seemed like a cool way to get paid to be curious. I worked for almost 20 years as a newspaper reporter, feature writer, video producer and columnist for Canadian daily newspapers. When I visited classrooms I told kids the truth: I couldn’t believe they were paying me!

I still feel there is so much I don’t know. Socrates felt the same way so I figure I’m in good company. I felt that way the first time I saw a library, with books stacked from floor to the ceiling, shelves taller than I was, categories ranging from history to geography to biography to fiction to art to cookbooks to comics! I remember thinking How can I read everything?! I still feel that way. Isn’t it funny how some things change and some things don’t?

I work now in Toronto as a freelance journalist, university teacher and writer.

A Song for My Sister (2012)
What happens when your wish comes true but everything goes wrong.
Yuvi's Candy Tree (2011)
Yuvi's pluck helps her survive an extraordinary exodus from Ethiopia to Israel. Winner of the Media Award from Be'Chol Lashon for children's books for Jewish diversity
The Hug
The Hug is the story of a hug with an identity complex.
The Shabbat Box
"For innocent 6-year-olds, being Jewish is still a hopeful business. Ask Ira, star of The Shabbat Box by Lesley Simpson, illustrated by Nicole in den Bosch."
--Jerusalem Report December 2001
The Purim Surprise
Naomi Levin's world turns upside down in more ways than she can imagine.